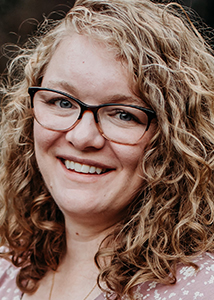 Brianna Kim has been with the African American Museum of Iowa for nine years and is the museum’s deputy director, having previously served as curator from 2013 to 2017 and director of operations from 2017 to 2022. As deputy director, Brianna is responsible for the organization’s financial systems and reporting, overseeing day-to-day operations, managing grant proposals, and developing organizational policies and procedures.

She served on the board of the Iowa Conservation and Preservation Consortium from 2013 to 2021, including a tenure as president from 2015 to 2018. She has been a member of the Iowa Museums, Archives, and Libraries Emergency Response Team since its inception in 2014. Brianna has a BA in history from Coe College and an MA in museum studies from George Washington University. Prior to joining the African American Museum of Iowa, she held positions or internships at several museums in Iowa, Alaska and Washington, DC.

Read About the Honorees